In case you didn’t know about the new craze that is Google Plus, here is some interesting info:

Google Plus is a social networking site created by the search engine giant, it began as a top secret service which created a buzz through its invite only process, which of course everyone wanted one!

Research shows that the Google’s social network Google Plus is growing at a vast rate. Whilst Google Plus began as an invite only user base, this has recently changed so that anyone can now join resulting in a massive 25 million visitors to the site worldwide. Google + has reached this target within a month from its launch making it a quicker success than any other social networking site including Facebook and Twitter. 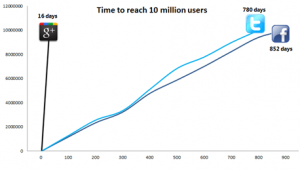 The growth of Google Plus has been influenced virally, whilst the majority of users originate from the US which is no surprise as 89% of US companies are using social media, it has also populated countries such as India which has recently become a more tech – established country with 3.6 million Google Plus users in one month.

Following India on the Google Plus user rankings is the UK as after one month of its launch there were 1 million users up and running on the network. Whilst half of the UK’s population is on Facebook, it was queried as to whether Google Plus was going to be a hit.

The service is continuing to grow worldwide even making its mark in countries such as Canada, Brazil and Germany. As we continue to monitor its success we wonder whether Google will defeat Facebook domination!

END_OF_DOCUMENT_TOKEN_TO_BE_REPLACED

END_OF_DOCUMENT_TOKEN_TO_BE_REPLACED
« Older Entries
This website uses cookies to improve your experience. We'll assume you're ok with this, but you can opt-out if you wish.Accept Read More