Anyone casting half an eye on the Twitto-Blogosphere over the last 48 hours cannot have failed to have heard the name “Samantha Brick”.

The journalist, writing for the Mail Online, managed to cause worldwide consternation and confusion by writing an article entitled “Why Do Women Hate Me For Being So Beautiful”, a work so astoundingly narcissistic and deluded that it seems like it should have been written by Gareth on The Office. 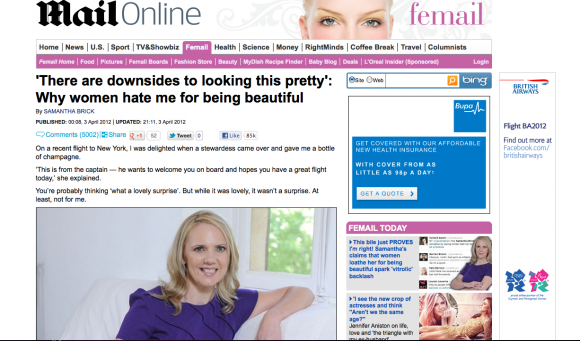 But aside from the arguments and debate over the content and justification of the article, what were the motives behind it? Surely the author and most certainly the editors were fully aware of the vitriol such an article would drive? Was this just a cynical attempt to drive traffic and, ultimately, ad revenue to the site? It seems hard to believe otherwise.

Can we SEOs learn from the Mail Online and their Twitter-baiting ways? Aside from driving an estimated 1.5m extra visitors to their site, around 7,000 Tweets and 100,000 Facebook likes, this article will undoubtedly have driven dozens, if not hundreds of inbound links with huge SEO implications. It’s no wonder the site has recently become one of the most visible sites in the search engines for a huge wealth of terms.

Can outrage be legitimately used as a tool for link building? Is it worth it? It’s unarguably a tactic of the Mail Online to build content over news – anyone who has ever been on their site will have spotted the cleavage-image-driven right hand sidebar to tempt wandering minds. As the MP Louise Mensch put it, “”We’re clicking on ‘Oh my God, one of the WAGs couldn’t put her hair up because she’d freshly painted her nails’ and then you’re thinking, Why am I reading this? I’m an adult.”

The Mail Online’s link building strategy appears to be almost entirely based around a negative viewpoint. Unlike the other British news sources, who rely on articles sparking debate to spread virally, the Mail go for the stick-poking method – and it’s hard to argue it doesn’t work. There’s nothing that provokes debate – and ultimately links – more than controversy, and The Mail seem to have that nailed.

That said, something tells me our clients wouldn’t be too happy if we drove dozens of high quality links from vitriolic and derogatory articles…maybe we better avoid it for now…

1. NAME YOUR IMAGES DESCRIPTIVELY AND USE PLAIN LANGUAGE Related to SEO, it is essential to use relevant keywords to help your webpage rank on search engines. Before you upload an image, you need to name it using a description you want that image...

END_OF_DOCUMENT_TOKEN_TO_BE_REPLACED

It is always very exciting launching a new UX/UI for your site. Unfortunately many companies don’t budget for a necessary SEO migration. Because of widespread confusion around site migrations, Google recently updated its site move guidelines in...

END_OF_DOCUMENT_TOKEN_TO_BE_REPLACED

There has been a lot of buzz around ad blockers after the launch of iOS 9, Apple’s latest operating system, as content blocking software topped Apple App charts worldwide. In the UK, two content blockers have hit the top 20 paid apps, with Purify...

END_OF_DOCUMENT_TOKEN_TO_BE_REPLACED
« Older Entries
This website uses cookies to improve your experience. We'll assume you're ok with this, but you can opt-out if you wish.Accept Read More